It's been a long winter with more snow on the ground and more days with freezing temperatures than ever before. At least in the time we've lived here in Basel.
You know it's cold when you are all alone on a sunday at 10 AM without any company from the bike club. Maybe there has been a sunday or two where I have been slightly late, but judging on the feedback from others in the club, there haas been days without anyone training on the road.
Today the sight was more encouraging, we were 8 at the club rendezvous point for a nice 2 hour ride. I did not bring my camera so you'll have to look at one from last year, but the dress-code was similar with me being the only one wearing knickers today. 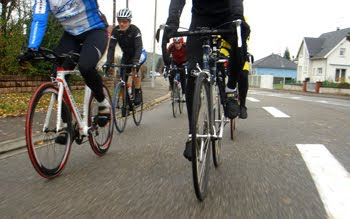 The ride was pleasant for the first 50 and with a lot more speed over the last 20. We divided the group in two, some went straight back and we were a few that did a little extra. With a couple of the fast guys in the group we made a good push at the end finishing the morning training with a sprint for the hill-top and lastly the city limit. My legs are not too bad, even though I felt tired after yesterdays training. Looks like i'll have a good chance of getting in shape over the next couple of months even with the move and all. Hopefully the snow is all gone for this year and there will be a great bicycle season ahead of us.
Indsendt af Anja og Morten kl. 14.18