One year ago when we arrived in Basel, we were struck by the large amount of people smoking. Everywhere on corners and in every restaurant we went, people were inhaling (and polluting the surroundings) with white smoke. It was a big contrast to Denmark where there has been a smoke-band on all public places since 2007.
We believed that it would take Switzerland several years to realize the sense in banning smoking from public places to protect those who have chosen not to die from lung cancer. 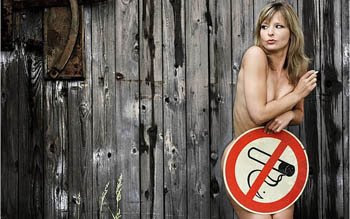 To our big surprise, yesterday the Basel community voted YES to the ban of smoking. The majority was not over whelming, 53% for, 47 against. But still... the decision is made.
Congratulations Basel for making the public space a smoke-free enjoyable area!
Indsendt af Anja og Morten kl. 13.12