L'Étape du Tour 2009 is now well over with. 170.2 km of riding, 3690m of climbing, 9500 riders starting of at 7 in the morning, of which 7389 made it to the top, incredible scenery, tons of enthusiastic spectators along the course, great team of work colleagues to race with - a day to remember for sure! 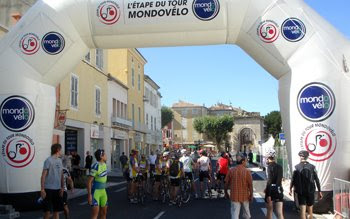 Before we got that far however, let's start with the beginning. Our team of riders arrived at Montelimar two days before the race start on monday. Bikes got unpacked, gear sorted out and most important of all, we had to go to the centre of the city to register. 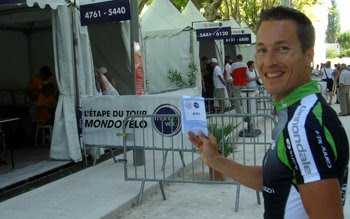 The chip was programmed correctly, my starting number was 4990 which placed me in the 6th starting block of 9. 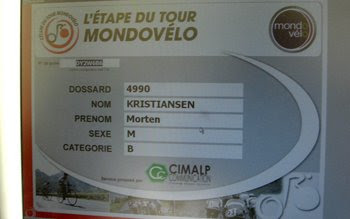 The strategy was clear; start out slow, find the rythm and get to the Mount Ventoux as fresh as possible to make it all the way to the top. 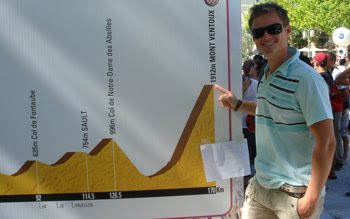 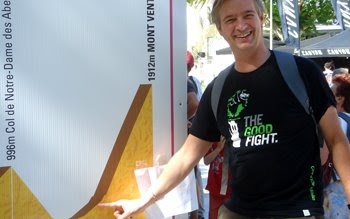 Next morning we got op at 4 AM to have breakfast, getting in the bus, driving from Privas to Montelimar and getting into our starting area before it would close at 6:30 AM. Then we waited for the start at 7.00 but it took us 25 minutes to reach the starting line, where the chip would be activated and we would be on our way. 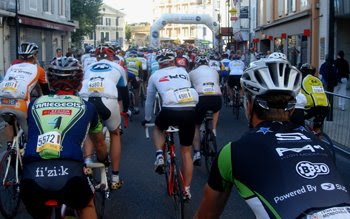 The first 10-15 kilometers were difficult due to a lot of positioning on the narrow roads, overtaking when the group was too slow and getting in behind another guy when the pace was to fast to stay below 165 bpm. This couple celebrated they mariage, hope they made it too the top.
I found a groou after the first climb, which was unfortunately also the first sight of an accident. We did see some crashes, but in general most people rode in a safe and professional way. 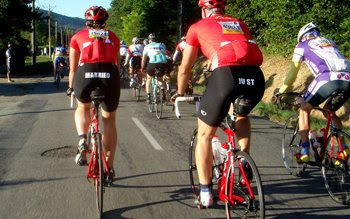 Half way though and we got the first good glimpse of the mountain. This picture is taken after Col 'd Evy, the first of the long climbs of the day. Spectacular weather - however very warm, so I had to stop at all the feeding zones to gather water. At the end of the stage I had gone through 7.5 liters of fluid. 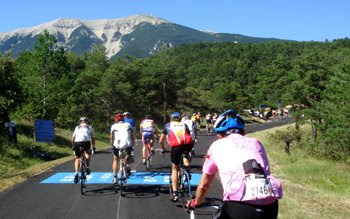 Next up Col de Notre-Dame des Abeilles , the first of the climbs with grades of 10-11%, making it a proper entry to the Mount Ventoux. 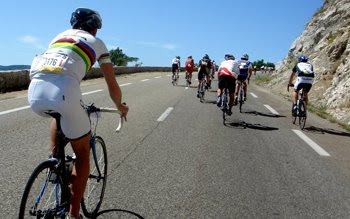 Then, after 150 kilometers, the great Mountain dawned on us. We reached the foot in just shy of 5 hours, taking on as much water at I coould fit before entering the forest at the bottom of the climb. The first 4000 meters were great, but then the following 10 kilometers were exhausting with an almost constant climb of 10% though a narrow forrest road. No wind, 32 degrees and a lot of people off the bike, walking at the side of the road. At some points it looked like a war zone, people falling of their bikes in pain from cramps, the ambulance picking up a few struck by the heat. Horrible to get through, but I was feeling fine and doing a good pace. A few overtook me, but I was gaining a lot of ground on the majority of the pack. 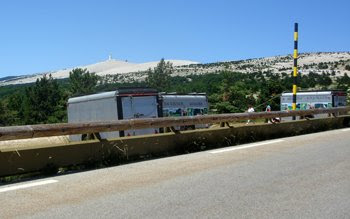 It did not last all the way, just as we got out of the forest and the sign said 5 K to the top, the first cramb struck in my right leg. I could not believe it, I had done everything to pace myself and save energy for the climb and in spite of the high temperature and humidity I was doing well I thought. I looked down on my leg and saw the muscle tensioning as it went into cramps. This could not come at a worse time. 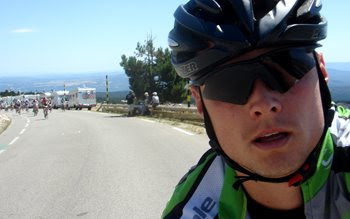 I could see the famous tower at the finish line, but I had to get up, try to stretch the leg and at the same time keep the bike going. I did this for a few minutes and the cramp disappeared slowly.
Had it only been one time, I am sure I could keep on pushing, but over the last 4 kilometers, my legs were constantly cramping so I had to let the pace go and just focus on spinning the legs keeping the bike going forward. 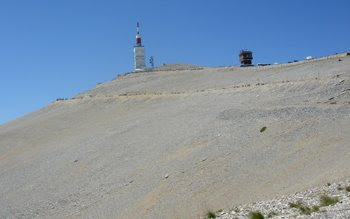 Finally I entered the last 1000 meters and threw safety overboard, geared 2 steps up and got out of the saddle. Sprinting I would not call it, but I did accelerate all the way to the finish line making it in 7:12:42. Unfortunately the time at the feeding stations and struggling with the cramps in the end had cost me 10-15 minutes, so I did not make it below 7 hours as I had hoped. Still I was happy just to make it to the top thinking of all the poor guys walking up in the side of the road. 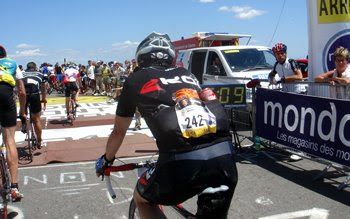 Almost 7400 out of 9500 made it to the top, luckly all of our group made it, some spending an amazing 10 hours of riding to get there. I was happy to be at the top, looking down on this amazing mountain and all the riders strugling to make it to the Arrive-signs. 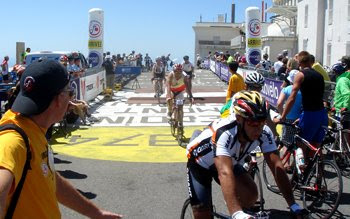 All there was left was to smile, take it all in and think of Anja who was celebrating her bithday in Denmark the very same afternoon. The thought of quitting was constantly pushed back by the image of her smiling face, which in the end was all I wanted to see at the top. 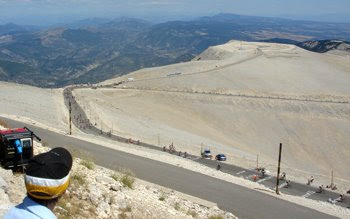 Thanks to everyone on the Good Fight team, and to everyone who owns a racing bicycle - you got to ride this mountain, there is no words to describe the feeling of making it to the top on your own. 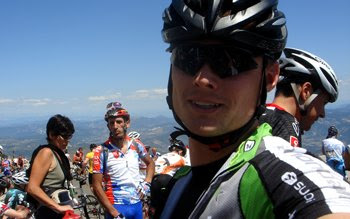 On saturday we'll see the pro peloton in the Tour doing the exact same stage, probably a whopping 2 hours faster than me on this sunny monday.
Cheers!
Indsendt af Anja og Morten kl. 14.58