Danish bicycle culture in the news

From Flush With Energy by Thomas L. Friedman in New York Times August 9.

"... I was riding in a car back to my hotel at the 6 p.m. rush hour. And boy, you knew it was rush hour because 50 percent of the traffic in every intersection was bicycles. That is roughly the percentage of Danes who use two-wheelers to go to and from work or school every day here. If I lived in a city that had dedicated bike lanes everywhere, including one to the airport, I’d go to work that way, too. It means less traffic, less pollution and less obesity.

What was most impressive about this day, though, was that it was raining. No matter. The Danes simply donned rain jackets and pants for biking. If only we could be as energy smart as Denmark!

Unlike America, Denmark, which was so badly hammered by the 1973 Arab oil embargo that it banned all Sunday driving for a while, responded to that crisis in such a sustained, focused and systematic way that today it is energy independent. (And it didn’t happen by Danish politicians making their people stupid by telling them the solution was simply more offshore drilling.)" 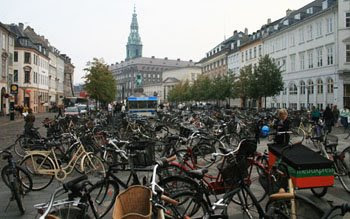 I think all Danish bike riders should be proud of that.
Indsendt af Anja og Morten kl. 04.15